Going to the Summer Course 2010 I was stiff in both hips and shoulders. It was disturbing me but still I thought it was not that serious. But oh so many things happened!

I think it all started when I was 18 years old. That summer I had a job where I spent the whole summer opening bags and entering information on a computer. Monotonous to say the least and my shoulders tensed up a lot due to the working position. After just a couple of weeks I got a burning point of pain in my left shoulder when working. The shoulders also got stiffer and my arms started to get numb when I raised them over my head. I tried to get help. For instance I went to a naprapath but my shoulders where deadlocked so she couldn’t do anything about them.

Time went on and every now and then I had a lot of pain in my shoulders, especially sitting too much by the computer when doing work or reports for school. Also, as long as I remember, I’ve had pain in my back every now and then. My back has even been crooked, partly due to playing transverse flute for eight years. If I exercised or practised the pain decreased, but I was only completely free from pain for short periods of time. I even noticed that I lost flexibility in my shoulders. I never went to see a doctor as I still didn’t think it was that dangerous.

By coincidence I attended a basic course in the autumn of 2009. Like many other participants I was surprised that I could stand up for that long, stand upright without getting pain in the lower part of the back. And when I raise my arms over my head they didn’t go numb straight away. But the clearest effect was at home on Saturday. I started to deal with old paper work that had been put aside. Several times I had procrastinated and put it off the way you do with boring things. It might not sound that remarkable but it was an effect that lasted for a long time, even at work. I noticed that I could keep focused better and was not that divided.

I practised for a while straight after the basic course but it flagged. I felt that I need to get started properly and as I lived nearby the Summer Course, I decided to go there! What luck that I did! 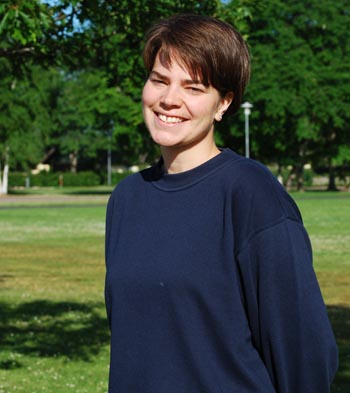 What happens and how you experience qigong is probably very individual. What happened to me at the Summer Course 2010 was, shortly summarized, that I got a better body image and a better feeling of my body. I could clearly feel the different parts and how they were connected to each other and also to the environment, for instance the floor under my feet. Almost the whole time a lot of small things happened. The second evening I could suddenly turn the upper part of my body much more too both sides. The locks in my hips and in the lower part of the back started to release. After a couple of more days the rest of the locks in my hips released. The feeling was very obvious. In the middle of an exercise I felt how the hip joints kind of relaxed and changed position. The feeling in the body was completely different when I went to the canteen for lunch.

Now, with some distance to the Summer Course, I can more clearly feel the mental effects. I didn’t feel sad before the Summer Course but still I feel much happier and more balanced now. I’ve always seen myself as a calm and sober minded person, who can easily concentrate but now I notice that I don’t get as stressed up as before. I can notice that I have a lot of things to do and that it might be a tough period of time, but instead of clenching my teeth, burying my head and keeping on, it’s more like a calm establishing of the fact and I manage to keep on doing one thing at the time. This in its turns means that I’m often surprised, looking back on the week of work, noticing that I’ve managed to do almost all the boring work that I thought I was going to get stuck with in the last minute as usual.

What I learned from the Summer Course was simply that small steps lead to big changes.