I first heard about Zhineng Qigong from a co-worker whose friend had gotten amazing results from practicing this method. During the first weekend of September 2016 a basic course in Hold Qi Up was held at a place close to me, and my co-worker wondered if I wanted to join. Why not, I thought to myself. So I joined the course and have not regretted that decision! 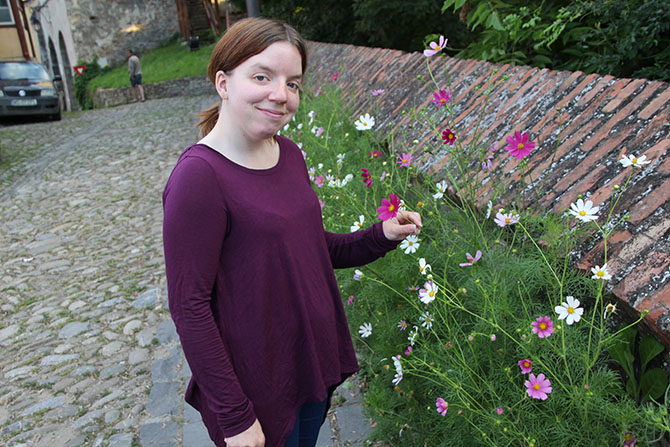 I have congenital heart problems and have been through several big surgeries. This has affected my body, especially my muscles. During 2010, I got tendinitis in my arm, something that became a chronic problem. The pain would blaze out with little provocation. I work in a kindergarten and I’m physically active the whole day, and this actually helped me maintain some agility. However, when I had to sit down in an office in front of a PC, I quickly noticed that my body didn’t like it. This negative effect affected my hands more than the rest of the body. I also harmed my back at work one day when lifting a child and I heard this loud whack in my back. I’ve had some problems after that day and it also affected my pelvis, that now and then have gotten stuck. I’ve also been struggling with locks in my neck and back. Due to these problems I started seeing my physical therapist again and was also sent to see a chiropractor. That treatment helped a little, but the next day I had the same problems again. I kept doing this for a long time, paying some good money, before finally giving up on it. This definitely didn’t work and I felt that I was throwing my money out the window.

When I heard of Zhineng Qigong I thought it was worth trying. I have been testing Pilates and other forms of training like strength training, but always felt that the results were meagre. Prior to my first qigong course I was struggling with shoulder problems. Every morning I had to pull my shoulders down into place, and that was very painful.

At the first day of the weekend course I had a lot of pain and was exhausted. At the end of the day I was very curious as to how the next day would be, considering all the pain I had during the first day. However, when waking up the next day I had no pains at all! My body felt fine! I told my husband and he was as surprised as I was. Could Zhineng Qigong really have such positive effects? Truth be told the pains did return, but I chose to see the experience that morning as an example of how things could become if I continued to practice. I did continue, and I’m very happy that I did!

I joined this first weekend course with two of my colleagues and after a while we started practicing together. It is very nice to come together, practice, correct postures and share experiences with each other.

I had a personal goal of practicing for one hour per day. I have been able to do so up until today and still have that goal going forward. I can feel that Zhineng Qigong really helps me and it is the best way of training that I know of. I also recommend everybody to try it.

My second course was much better

During the time after my first weekend course I was thinking that not many things had improved for me, and I said so to my colleagues. They noticed big changes for me, both physically and mentally, but I thought little had changed. I went around thinking like that until I joined my second weekend course. At the time I had practiced for about 4,5 months. During the first course I felt very difficult, and everything was hurting. Standing was difficult and my body was shaking, I had to move my legs all the time since my back hurt so much. I have to laugh at myself when looking back. I thought not much had happened to me, boy was I wrong! I simply hadn’t noticed all the changes. During the second course standing was as easy as child’s play. I could stand and stand, without any pain. I didn’t have any back pain either, and got so much energy that I was jumping and laughing during the breaks. My body was so agile! Noticing the difference between the first and second course was fantastic.

I also joined courses in Shenxin Qigong, Tuina and Weituo Jin, and I found them to be very exciting. During my first Weituo Jin course my shoulders improved a lot and the tendonitis in my arms disappeared.

By practicing Zhineng Qigong I have rid myself of pains in my neck, shoulders and back. Previously I also used to suffer a lot from headaches, but they are nearly gone too. I only had to use painkillers once after I started practicing and that was directly after a surgical procedure that gave me a pacemaker.

In October 2017 I suddenly passed out at work. Nerve signals meant for the heart didn’t reach its destination and after some investigation it was concluded that I needed a pacemaker. At first I got very angry that I had to undergo this procedure, and I was also angry with qigong. Why should I need another heart surgery after practicing qigong for more than a year? I thought that if the operation wasn’t strictly necessary at this time, maybe I could practice more and recover by that way. But the doctors didn’t want to wait and that was frustrating for me. I had to accept the situation and the surgery was performed during December 2017. I hoped that I would be able to join the Winter Course prior to the surgery, but they insisted that we do it earlier than the course. After the surgery I suffered from some complications. I got some internal bleeding and big swellings when the area around the pacemaker was filled with blood. This lead to pain and reduced mobility. I was prohibited from raising my arms above the height of my shoulders for 4 weeks after the operation, and this prevented me from practicing anything else than La Qi. I was on sick leave and wasn’t able to do much. Recovering from the surgery took considerably longer time than I was told prior to it. The progress was very slow, and I needed a lot of help – even to put on a jacket or remove a sweater. I also felt it in the rest of my body since I wasn’t able to practice the way I was now used to. As soon as I was able to I started practicing Hold Qi Up and Shenxin Qigong, and step by step I became more supple and was able to do more things. I decided to join the Winter Course 2018.

Just before leaving for the Winter Course I had started to work 50%. It was still painful when I lifted my arms and around the scar the movability was very limited. After working half a day I was very tired so I wondered how well I would be able follow the Winter Course. I was thinking that it would be good for me, that things only would get better. And they sure did! I trained at the course for 8 days. I often lifted my hands up above my head without any problems. I even did some extra training my myself outside of class and I had little pain. It was incredibly nice! What a good course! I was a little stiff and sore in the beginning, but I quickly found that I became more supple and was better able to raise my arms up. My heart was pounding during the course, but I had little pain and also the pain was different from the pain I had at home. I felt that it was very good to be in such a strong qi-field!

I was filled with energy for some days after that course. I started working full time the day after I returned from that course and was full of hope and courage! It was so lovely! However, after three days things changed and I became very tired, had symptoms similar to the flu, became irritated with just about everything, and everything became difficult. This threw me off somewhat, since things had gone so well at the Winter Course. After a week I was back at my good mood and in a body that was much more amenable. The stiffness I had felt around the scar from the surgery was almost completely gone, and my whole body had become more agile. Things went very well at work and I even had surplus energy after a full day of work! It feels lovely to have a body that works well.

The cool thing about practicing this method is that no matter how much pain I have, when I practice the pain disappears while I’m doing the movements, or as soon as I finish. Also, I don’t get muscle soreness from this training, as I get from other kinds of training.

I feel grateful and happy

My body used to be stale and full of pain, and on many occasions I have actually said that I felt like I was 80 years old. My body is now more agile with much less pain. I can even somersault with the children at the kindergarten! I also got rid of my fur allergies and no longer take any pills when I’m visiting someone with pets. I can even pet cats and dogs without sneezing. It really is lovely. I also notice that my stress levels have reduced, and that I need less sleep than before. I get up at 5.30 in the morning to do my qigong exercises, but in spite of this I do not need to go to bed earlier. Zhineng Qigong has made my life easier and I’m very grateful for that. It makes me very happy that I have learned this method that enables me to help myself get better health!